(The three unidentified newscuttings below were found amongst the effects of Henry Quick's daughter Ellen, after her death in 1952. It has not been possible to identify their sources - especially as in those days newspapers often copied articles verbatim from each other.)

Loss of the Brigantine Isabel and all Hands. On Saturday evening [26 Feb] advices were received by Messrs. Job Bros. & Co apprizing them of the loss ... The Isabel was commanded by Capt Quick and had a crew of eight men, all told. She left Maceio, Brazil, in ballast, on 15 January, and was out thrity-eight days. It appears that in the gale of Tuesday night, the ill-fated vessel ran on the rocks near Gull Island, St Mary's Bay, and immediately went to pieces ...

That Wednesday, the 3rd of March 1881, local man Thomas Stamp made his way up to the small town of St Mary's to report having found two things on the day before down at Gull Island Cove. The first was the cover of a binnacle with "Isabel of Liverpool" painted on it. The second was the body of a man with "certain initials" tatooed on right and left arm.

However much the local people might have been expecting the remains of the crew to start being washed up on their shore, it must have been a bleak and shocking moment when Thomas Stamp recognised what he had found. The body was in such an advanced state of decomposition that it was deemed necessary to have it buried straight away. Properly coffined, the body was buried on Ash Wednesday at Holyrood (now St Vincent's). I am told by a local historian that in such cases, in a community such as this, a body would be buried by the local people with care and in a Christian manner in the local cemetery (See Historical Background by William Hillier on Page 6).

The authorities at St Mary's fretted that a magistrate should have been consulted first so that an inquest could be held before the burial, but on closer examination of the circumstances they commended Stamp for his actions and accepted a deposition before a magistrate in the absence of an inquest.

A full week later, on 10th of March, Thomas Stamp and another local man, Mr Patrick Gibbons, were back down by Gull Island Point again. Patrick Gibbons recovered of the remains of a man, about five feet nine inches tall, with the word "HOPE" surmounted by a brigantine tattooed on his right arm. Mr Stamp undertook the task of recovering what I think could only have been the body of Able Seaman Joseph Ridings, age 24,with his initials "J.R." tattooed on his left arm. What was left of the poor young man was described in detail in one of the newscuttings saved by Henry Quick's daughter Ellen:

"...Around his waist was a belt sustaining a pair of trousers of new cloth, covered by an oilcloth one, inside of all being a pair of knitted drawers. The height of the body was about five feet ten."

Both bodies were placed in coffins; one was interred on the 10th, and Joseph Ridings on the 11th, just as the first body had been buried back on the 3rd March.

On 12 January they thought they had found the Captain.

"On this day, the 12th, Thos. Stamp affirms that on yesterday he succeeded in recovering another body at Gull Island Cove, apparently 50 years of age, with iron-grey whiskers and moustaches, and supposed to be the Master of the ill-fated brigantine. Shrouded and coffined, this body was interred beside the others at Holyrood at half-past eight this morning."

The information was "deposed to on oath", the deponents saying that immediate burial was necessary. 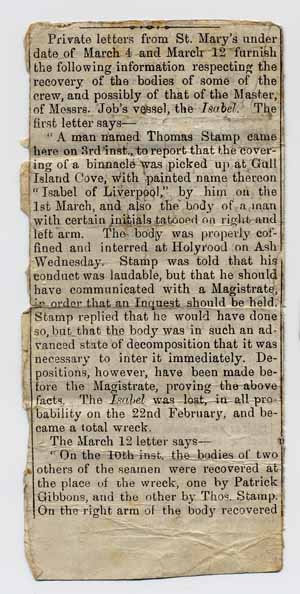 Part of the article which contained the description of what was thought to have been Captain Quick's remains. It was found folded up very very small, along with the last letters written by Captain Quick to Ellen, and all enclosed in a tiny hand-made purple silk purse.

There was only one other newscutting amongst Ellen's effects:

"A Despatch was received here yesterday from Trepassy stating that the bodies of four of the crew of the ill-fated brigantine Isabel, lost near Gull Island, St. Mary's Bay, on the 22nd ultimo, had been washed ashore and taken in charge by the people residing in the neighborhood of the disaster."

They may not have known ...

"A telegram received yesterday from Salmonier announces the finding of the body of Captain Quick, of the ill-fated Isabel. It was thought that his body was amongst those previously discovered ... but the question of identity has been set at rest by the fact that the late body found has on its arms the initials of the deceased Captain, and bears such other evidence as places the matter beyond doubt ... " [Morning Chronicle 31 March 1881]

And as with the others, the body was interred as soon as it was found.

We still hope to find out what the "other evidences" were, but may never know if Quick's family were notified of this second find. The fact that the description of the first had been preserved with the captain's letters and there was no mention of the second, invites the question.

I think the body Thomas Stamp found on the 11th, initially taken to be the captain, would have been the Mate, William Tucker, who was the same age as Henry Quick, also with a master's certificate, and from a similar background. They both had "iron grey whiskers".

(At first I wondered if Quick wasn't discovered until last because he had - as legend has it captains are supposed to do - stayed on last, trying to save what he could. But then a sailor told me that when fighting against conditions such as these, all of the crew members would have lashed themselves somehow to the vessel to stop themselves being washed overboard. After the vessel fragmented, the length of time each one took to be washed up would more likely have had to do with the buoyancy of the part to which each was lashed.)